Former Smith’s frontman Morrissey has been forced to cancel nine tour dates after he was admitted to William Beaumont Hospital in Royal Oak, Michigan last week.

At the time, Morrissey was suspected of suffering from a bladder infection, however tests have discovered that he is suffering from a bleeding ulcer and although he is expected to make a full recovery within two weeks, he has been forced to reschedule several shows of his US Tour. 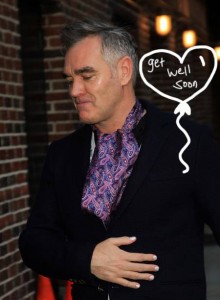 After being admitted, Morrissey had already been forced to reschedule three shows staring with his Flint (Michigan) show on 24th January, and subsequent shows in the days following in Minneapolis and Chicago.

But after the diagnosis was worse than initially feared, he has also been forced to do the same for forthcoming shows in Asheville (North Carolina), Nashville (Tennessee), Atlanta (Georgia), Lawrence (Kansas), Clear Lake (Iowa) and Lincoln (Nebraska).

It is the second time that Morrissey has been forced to reschedule shows as part of a tour. Last year, when the singer’s mother fell ill, Morrissey rescheduled several shows so he could spend time with her.

The singer expects to restart his tour on February 9th with a show in Las Vegas (Nevada).

It has been a busy few months for the English singer, he toured America in the autumn of last year, then played several dates in New Zealand and Australia before returning to the United States in early January.

“Morrissey is expected to make a full recovery and thanks everyone concerned for their support,” stated his representative Lauren Papapietro. Let’s hope he gets well soon! We’ll just spend the time listing to his album anyway while browsing through the latest music, hollywood gossip and maybe visit eonlinecasinoreviews.com as well.